I stopped at the main entrance and asked for Babushka. "Babushka?" repeated the guard. "Go round to the side gate." At the side gate I found other guards who directed me through a little garden and I finally entered the palace by a sort of back door.
The svetzars here told me to climb the stairs to the top floor, and Babushka's room was the last door along the corridor. The Tsar's private elevator, which he had built in recent years, did not work any more and the stairway wound round and round the elevator shaft.

I was ushered right into her room, which was very small–about the size of an ordinary hotel bedroom. There was a desk in one corner, a table and a long couch, several chairs and a bed. It was the kind of room you would pay two or three dollars a night for in an American hotel. Babushka came forward and shook hands with me...

I said, "How does it seem to be here in the palace?"

"Why," she answered artlessly and without hesitation, "I don't like it at all. There is something about palaces that makes me think of prison. Whenever I go out in the corridor–did you notice the corridor?–I have a feeling that I must be back in prison–it's so gloomy and forbidding and dark. Personally, I'd love to have a little house somewhere, with plants in the window and as much sun coming in as possible. I'd like to rest. . . . But I stay here because 'this man' wants me to." "This man" was Kerensky.

There was a touching friendship between Babushka and Kerensky. In the swift whirl of events the old grandmother was in danger of being forgotten, after people got over celebrating the downfall of the Romanoffs. But Kerensky did not forget. He made her think that she was very necessary to the new government of Russia. He asked her advice on all sorts of things, but whether he ever took it or not is very doubtful. He paid her public homage on many occasions and she loved him like a son... 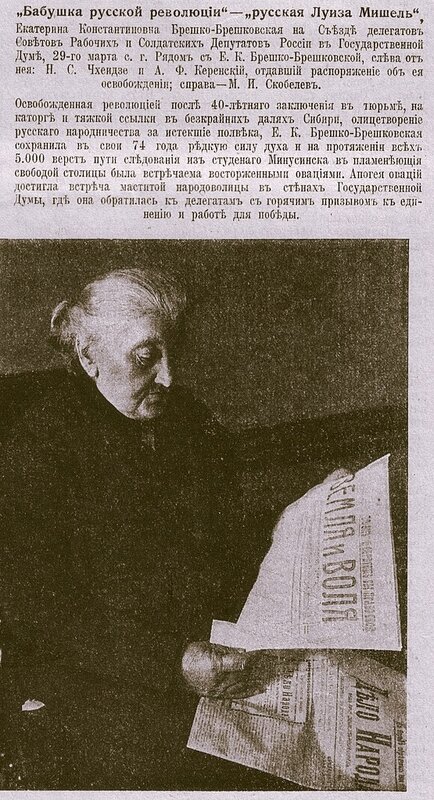 Babushka believed that the Constituent Assembly would meet and form a government, and Kerensky ought to be the first President. She intended to tour Russia in a sort of presidential campaign. Of course I wanted to go along. There were always a lot of people around Babushka, so she told me to come down early in the morning and we would have a private talk together.

I saw Babushka a good many times after that and found why she lived in this back room on the top floor of the Winter Palace. First, it was because she chose to live there. They had offered her the choice of the beautiful apartments and she had refused anything but this simple room. She insisted on having her bed and all her belongings crammed into the tiny place, and ate all her meals there. I don't know whether it was her long years in prison that made her assume this peculiar attitude, or if it was just because she was a simple woman and very close to the people. ..

We walked up and down the corridor. I remember a significant thing that she said to me. "If anything terrible happens to my country it will not be the fault of the working people, but of the reactionaries." She said she was afraid of a serious counter-revolution, but she didn't seem to know how or when it would break.

I told her I had come for two reasons: First, I wanted to tour the country with her, and second, I wanted to meet Kerensky. She stopped short and looked at me.
"You're very naïve," she said.
"So were you," I answered, "when you smuggled bombs across the country." Babushka stopped again and laughed merrily.
That's right," she admitted...

Babushka is an old lady and is very forgetful. Often she did not remember in the afternoon what she had said in the morning. I once spent a most amusing day in the Winter Palace, accomplishing none of the things I set out to accomplish. I had had an appointment with Babushka at ten o'clock. At ten she was asleep. At eleven-thirty I went in and we began to talk. Five minutes later three French officers came to pay their respects. Babushka said they would stay but a moment. They stayed two hours. All this time I waited in the adjoining room with a young Caucasian officer, three girls, two old women and several miscellaneous officials...

She had a plan for educational work which had the approval of President Wilson, and a large fund donated by American philanthropists, but somehow the soldiers and workers did not understand it–they accused her of using the funds for political purposes that were reactionary and against the Soviets. A sad misunderstanding ensued which probably led to all the rumours about Babushka's imprisonment by the Bolsheviki. Nothing of the kind ever occurred. I do not think any one in Russia ever thought of harming Babushka, although she must have been misled into believing this because for a while after the fall of the Provisional Government she was in hiding. But later she lived quietly in Moscow. 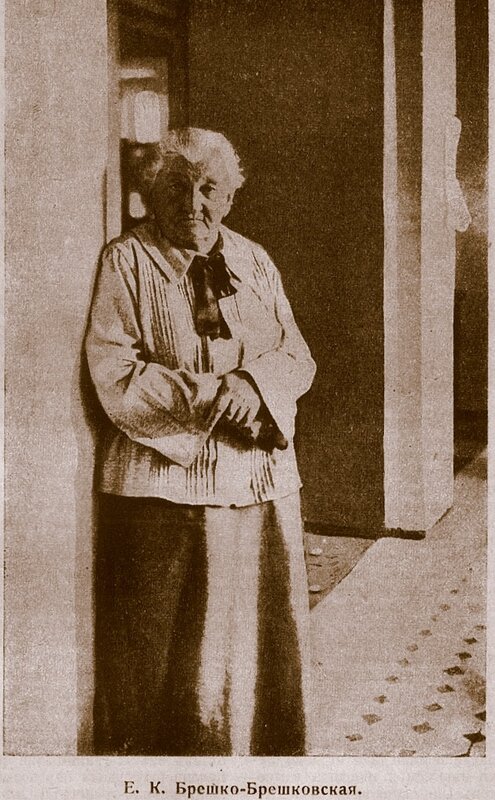 There is nothing strange in the fact that Babushka took no part in the November revolution. History almost invariably proves that those who give wholly of themselves in their youth to some large idea cannot in their old age comprehend the very revolutionary spirit which they themselves began; they are not only unsympathetic to it, but usually they offer real opposition. And thus it was that Babushka, who stood so long for political revolution, balked at the logical next step, which is class struggle. It is a matter of age.